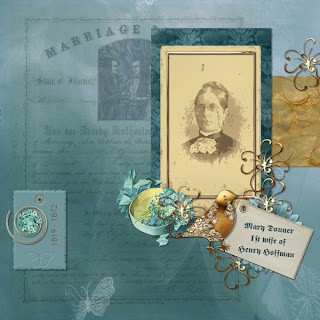 The immigrant Henry Hoffman apparently lived in Jo Daviess County, Illinois after his arrival in the state in 1854. He did work on the early railroads and that may be how he came to know a Bavarian woman living in more central Illinois in the town of Peru in LaSalle County. He went to the LaSalle County courthouse in Ottawa on 2 April 1858 where he obtained his naturalization papers and a marriage license for himself and Mary Donner (see the license in this post.) They were married two days later. In the 1860 census they were both recorded in Derinda Township, Jo Daviess County. They had no children and Mary died of heart trouble on 11 September 1872. Her funeral is recorded in the German language records of the nearby St. John's Lutheran Church in Massbach (that Henry did not attend) but she was buried in the Elizabeth City Cemetery. The age on the tombstone allows calculation of her birth date as 22 April 1819, making her almost nine years older than Henry.

The cousin who has this photograph says that it depicts Henry's first wife. She claims they developed a close relationship that was evidenced by their correspondence during the time in 1865-66 that Henry spent away in the Union Army. There is no sign today of their letters, however. Henry remarried and had children, but it appears that was not the happiest of unions, at least according to his widow's comments to a pension claims examiner.
_________________________________
Scrapbook digital materials by Retro Designs kits Flight of Fancy and Golden Memories
Posted by Jean at 7:40 PM 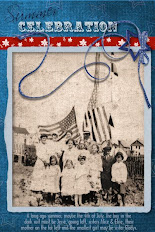